Digging Up Irish Roots on the Western Front

Digging Up Irish Roots on the Western Front 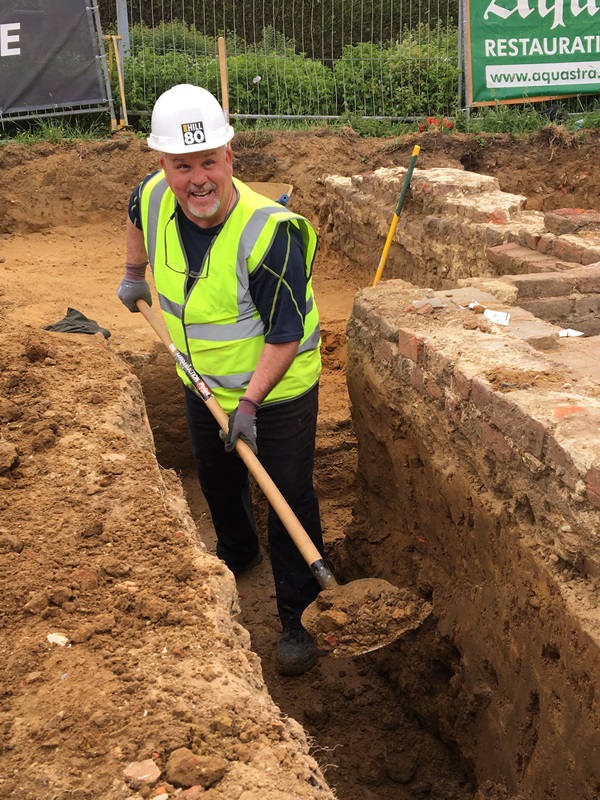 Wait, did I hear that right? An excavation of a World War One battlefield? I backed up the podcast and listened again. It was true! And even better, it was a place I knew from history as a battlefield where Irishmen of all backgrounds fought together to take a key position in what would come to be called the Battle of Messines Ridge.

I looked up DigHill80.com for details. This proposed archaeological dig would be the first crowdfunded excavation in history and if successful, might pave the way for future digs. With the support of my wife, I proceeded to join the dig team as a backer and volunteer digger.

On June 7, 1917 in what was the prelude to the Third Battle of Ypres (nicknamed ‘Wipers’ by the British) two divisions were assigned the objective of taking the village of Wijtschate on the northern end of the Messines Ridge. As it occupied the highest point on the ridge, the taking of this German stronghold was paramount to the offensive’s success. To this end, General Sir Hubert Plumer specifically requested that the 16th (Irish) Division and the 36th (Ulster) Division be placed under his command (British 2nd Army) and assigned them this key objective.

Plumer had two very concrete reasons for choosing them. First, both units had solid combat records from their fighting on the Somme the prior year. His second was more forward looking. As the 16th was primarily composed of Catholic Nationalists and the 36th of Protestant Unionists, he was already looking towards post-war Ireland and the coming fight over what status it would hold. Free State? A republic? Whole or divided? Plumer made no apologies about his calculations that working together now as comrades-in-arms would serve to ease the process when the question was ultimately decided. History would bear out much of what he predicted as the two units, fighting side by side overran the village after two hours of fierce fighting.

My goal in going to Wijtschate was to fulfill a lifelong dream of participating in an archaeological dig and to further my love of history, particularly of the Irish. However, my experience was far from simply a Celtic one. A quick headcount of my fellow participants revealed archaeologists, forensic anthropologists, and volunteers from Slovenia, Czech Republic, Hungary, Canada, Israel, the Netherlands, U.K., Sweden, and Spain. It was a cultural exchange on steroids.

I was slated to dig the week of May 14. Monday morning, I arrived early, checked in and went through the security briefing. With administrative tasks completed, we were assigned to an archaeologist who would be our team leader. I was placed with ‘Jasper’, a Belgian with a Ph.D. from the University of Ghent. He was responsible for excavating the cellars of homes that had been reduced to rubble in the battle. There was no time for tedium. Within minutes of digging we found an unexploded British 18-pounder shell. We planted a red flag next to it and summoned the Explosive Ordnance Disposal (EOD) technician as we stepped back the requisite twenty meters. He examined it, declared it safe (the firing pin was broken) then removed it for pick up by the Belgian army.

The remainder of the day yielded many more treasures. Bayonets, a mess tin, shrapnel, fuses, bullets, shell casings, personal hygiene items sent from home, and broken plates and bottles were all pulled from the earth. Our digging was halted in the afternoon for thirty minutes after we unearthed a cache of Mills bombs, a type of British hand grenade. Our EOD tech told us to place a little extra distance between us and the cellar as hand grenades had the greatest likelihood of exploding due to corrosion after decades in damp soil. To this day, people are killed each year from picking them up while walking battlefields.

The next morning, I was afforded the chance to assist a team of forensic anthropologists who were exhuming the bodies of German soldiers on the far end of the site. At the time the body count had reached 68, a figure that was expected to rise dramatically. In a war where millions were killed, this was not unusual.

With spade in hand, I gently removed the soil one inch at a time. The knot of nerves in my stomach grew the more I dug, born of fear that I might damage a bone or inadvertently step backwards onto one of the adjacent bodies, all of which were treated with the utmost care and respect. After a few inches of digging I unearthed the top of a skull. More experts then joined us as we carefully removed the surrounding soil. That task completed, they switched to long toothpick-like tools to create a pedestal of earth under the skeleton. This process could take days for each body.

Each day ended promptly at 4:30 leaving me plenty of time and daylight to explore Ireland’s footprint on the area. My first night I walked to the Wijtschate Commonwealth Cemetery on the far side of the village. At its entrance stands a Celtic cross engraved with the words ‘16th Irish Division’. It was here where 56-year-old Major William Redmond of the 6th Royal Irish Regiment, Member of Parliament and advocate of Irish freedom was wounded on the morning of June 7th. He enlisted in the belief that Irish participation in the war would bring it a step closer to self-government.

Private John Meeke of the 36th Ulster Division found Redmond with a bullet wound in his leg and carried him towards the rear until he, too, was wounded. They were eventually taken to a dressing station where Redmond succumbed to his wounds. The Last Rites were administered by a Protestant chaplain, an occurrence which would have been unheard of back in Ireland. But war has a way of changing one’s perspective and interfaith exchanges like this were commonplace on a battlefield where casualties climbed into the thousands. With the prospect of meeting one’s maker looming large, the question as to whether your chaplain was Anglican or Catholic shrank to insignificance.

The second night found me at the Menin Gate for the Last Post ceremony. Except during World War II, this ceremony has been held every night at 8:00 p.m.  since July 1, 1928. A pleasant surprise awaited me as I discovered they were honoring the Irish contribution to the war. After the buglers played ‘Last Post’ a lone bagpiper played ‘It’s a Long Way to Tipperary’. This was followed by a marching band striking up ‘Danny Boy’ before marching from under the memorial arch into the town square. I couldn’t have asked for a better addition to my Irish adventure. Or so I thought.

A quiet beer and some time to write in my journal was the plan when I entered the Old Bill Pub, famous for its selection of Belgian beers. After finishing my second pint, I paid my bill and began gathering my things, whereupon a group of seven Irishmen walked in and ordered a round. I struck up a conversation and discovered that these Wexford men were there to visit the grave of their great-uncle, who had been killed at the Battle of Messines Ridge. My night continued for a few more hours as we discussed Irish military history over beers they insisted on buying for ‘the Yank’. Suffice it to say, an already deep connection was made deeper.

My final day on the dig was bittersweet. I felt a sense of loss at saying goodbye to this piece of history but was also contented with my contribution to the dig. Jasper must have sensed this, as he suggested I take a picture next to my ‘baby’-the cellar I’d spent so many hours exploring.  I said my goodbyes and expressed my thanks for having this dream realized.

No trip to this area would be complete without a visit to the Island of Ireland Peace Park, just fifteen minutes south of Wijtschate in the village of Messines. I paused among the marble slabs, each containing a poem or message from members of the three Irish divisions that fought in the war (10th, 16th, and 36th) before entering the round tower, called ‘Cloigtheach’ in Irish. Residing inside are volumes of books containing the names and biographical data of the over 35,000 Irishman killed in the Great War.

With a plan to leave early the next morning I made a late-night visit to an Irish memorial that was a but a mere 100 yards from my B&B. It’s hard to find but well worth the effort. It rests in a small courtyard off St. Martin’s Cathedral, replete with the Irish tricolor and Celtic cross.

If you make it to West Flanders take the time to explore all that the Irish did in the area during the Great War. It brought me closer to my heritage and deepened my understanding of what it means to be Irish. I believe it will for you too.